The Police Department has utilized a canine program since 1977, and since that time, 12 officers and their canine partners have dedicated a great deal of time and effort to the program. 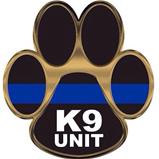 Those officers and their partners include:

Thanks in part to the generosity of the Saint Paul Police K-9 Foundation, Maplewood Police were able to welcome the K-9 team of Officer Joe Demulling and partner, Brix.

Employees at the White Bear Lake Sam's Club presented a donation to the Saint Paul Police K-9 Foundation, a portion of which would be used to fund the grant for a new Maplewood Police Department K-9 team. Through the efforts of Sam's Club employees, more than $14,000 was raised and presented to the K-9 Foundation. Approximately $6,000 of that was used to offset a portion of the cost to the Maplewood Police Department.