Today, Gladstone Savanna at the southwest corner of Frost Avenue and English Street is a quiet Neighborhood Preserve. But from 1887 to 1915 it was the primary maintenance shop for the St. Paul and Duluth Railroad (SP&D) and employed over 100 men. 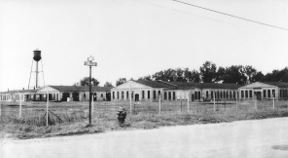 This location was chosen in 1887 because it was the first large, level area north of St. Paul and adjacent to their tracks headed to Duluth. The roundhouse could service up to 25 steam locomotives. Other buildings were used to build or repair the more than 2,500 cars and locomotives owned by the railroad. For instance, in 1894 the shop repaired the badly burned engine Number 4 that pulled a train of passengers from the Hinckley fire.

In June 1900, the Northern Pacific (NP) Railroad became owner of the SP&D. The NP already had the Como Shops and began phasing out work at Gladstone. In 1902, all passenger car repairs were relocated to Como and two years later the freight car repairs were moved. In 1915, the remaining machinery was relocated to their newly completed Mississippi Shops.

During the next 64 years NP sometimes leased the site to other companies, but also began demolishing some of the buildings. Some of the renters were the American Dump Car Company, Foley Brothers and A. Guthrie and Company - the latter two were railroad contractors. In 1949, the Seeger Refrigeration Company (later Whirlpool Corporation) rented the buildings for storage until 1979 when the remaining buildings were demolished.

The site sat vacant until 1994 when Maplewood bought the land to be preserved as open space. In 2012, the City hired an archaeologist to survey and document the site before it was covered with soil to remediate contamination from the industrial use of the site. During this time, several of the large limestone foundations for the roundhouse and machine shed were briefly exposed and it was realized that many below ground features remained intact. The site has since been replanted with native grasses and trails have been constructed. Entries and a sitting area near the former roundhouse have been landscaped with design elements that reflect the site's railroad history.

Take a walk sometime at Gladstone Savanna Neighborhood Preserve and as you do try to imagine the noise and steam and bustle of the past.