At the southern tip of Maplewood, Fish Creek cuts through bedrock, woodlands and grasslands on its way to the Mississippi River. Hiking the deer trails, it's easy to imagine Native Americans walking this route between the river and Carver Lake a thousand years ago. 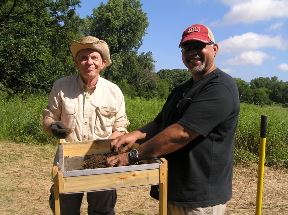 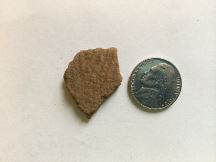 In 2005, an archaeological investigation uncovered Native American artifacts near Fish Creek in Maplewood. In July 2015, Archaeologist Jeremy Nienow led an intrepid group of citizens back to that archaeological site. The group was seeking to better understand the area's history, especially whether the 2005 archaeological site extended further west and whether there were additional artifacts.

In a two-day exploration, Nienow and his crew of enthusiasts recovered 68 artifacts near the original site. Fifteen of these were from modern times, including items like a plastic doll's arm. Older artifacts included thirteen lithics (flakes from stone tools), made from chert, quartz, or siltstone. Thirty-nine ceramic pot sherds (pieces of pottery) were found. These were grit-tempered (clay mixed with crushed rock) and cord-roughened (imprinted with a fiber pattern), features which help date the pottery. The largest of the sherds is about the size of a quarter.

People began inhabiting Minnesota after the last glacier receded around 12,000 years ago. The state labels historic periods since that time sequentially as:

The design of the ceramics found at Fish Creek dates this archeological site to the Late Woodland period, from 700 AD to 1100 AD. This was likely a temporary campsite, not a permanent settlement. There are only a few Late Woodland sites in Ramsey County.

So, who were these people from the Woodland era that traveled this corridor and camped along the creek 900 to 1300 years ago? They were people who supplemented hunting and gathering with some agriculture, which allowed for more permanent, year-round settlements. The Woodland tradition saw the transition from spear and atlatl to bow and arrow for hunting and warfare, and the resulting use of smaller projectile points (arrowheads). Ceramic vessels came into use during the Woodland period. And effigy mounds used for burials, such as those at Mounds Park in St. Paul, are also demonstrative of this era.

In coming years, Maplewood and its partners hope to continue archaeological investigations in the Fish Creek corridor.