A little known early Maplewood history concerns Midvale Farm, a 280-acre cattle and horse breeding farm that straddled the present-day Maplewood and Oakdale border from 1886 to 1896. It was located near the intersection of Century Avenue and Stillwater Road and included 160 acres in Oakdale and 120 acres in Maplewood.

The land was owned by John L. Merriam and his son William R. Merriam, both prominent in St. Paul banking, real estate, railroads, and politics. John started the Merchants National Bank and served in the Minnesota Legislature, while William became president of the Merchants National Bank, served in the Minnesota Legislature, and was Governor of Minnesota from 1889 to 1893. 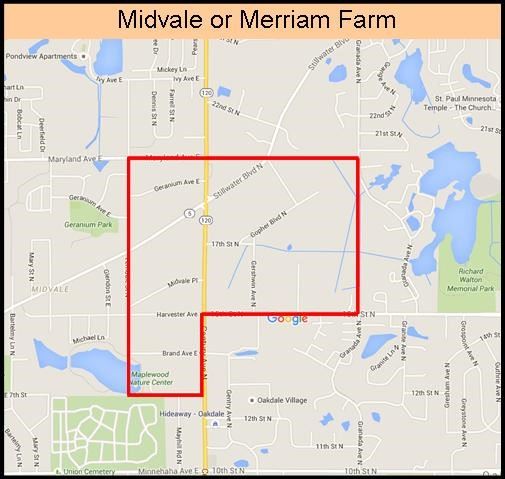 John L. Merriam began the farm in 1885-86 buying 120 acres in present-day Maplewood for $14,394 from Myron Brown, a real estate speculator. In 1887, Merriam purchased 140 acres in present-day Oakdale, and later another 20 acres for $5,000, bringing the Midvale Farm acreage to its final 280 acres. The name Midvale came from a nearby railroad station in Oakdale that was part of a proposed commuter suburb platted by the Midvale Improvement Company in 1887.

William R. Merriam and his wife, Laura, a niece of Civil War General Winfield Scott Hancock, operated the breeding farm, showed cattle and raced horses at the Minnesota State Fair and other venues. Newspaper articles of the time describe Midvale Farm as the Merriam's "summer place." They also owned a large mansion in St. Paul (which became the Science Museum of Minnesota in 1927) and another farm near Forest Lake. Among Merriam's friends was James J. Hill, from whom he once borrowed a horse trailer to transport a prized bull from Midvale Farm to Forest Lake.

In January 1895, John L. Merriam died and in July 1896, a major fire destroyed two large stock barns and two sheds. William decided to sell the 120 acres in Maplewood for $12,000 to the Midvale Company, which was incorporated in August of 1896 by his colleagues. In 1897, when William was president of the Midvale Company, the same 120 acres was transferred to Jule M. Hannaford, a Northern Pacific Railroad executive. After several land transactions, Siems Brothers-Helmers, Inc. platted Midvale Acres in 1934 and Midvale Acres Number 2 in 1938. Seven acres of Midvale Acres was purchased by Maplewood in the 1960's to become part of the Nature Center.