Just north of the large brick barn at the intersection of Frost Avenue and White Bear Avenue is a compact cemetery. Two granite markers bookend the site, but all the nearly 3,000 graves are unmarked.

The Ramsey County Board of Control was looking for ways to save money at a meeting in 1894. They noted that it cost the county several hundred dollars each year to bury paupers from the Poor Farm at a cemetery off-site. On April 2, 1894 they decided to set aside a potters' field cemetery north of the main Poor Farm buildings, near the Wisconsin Central Railroad tracks and White Bear Avenue. Deceased residents of the farm buried here as well as any unclaimed bodies in the county.

A road was graded so the horse-drawn hearse could get though the hilly pasture. The graves were dug by hand and were marked with wooden stakes. There were no burials during the winter because of frozen ground. Instead, the deceased were stored in a cave-like place at the farm and Mother Nature froze them. The cave was near the pigpen to mask the smell when the spring thaw came. The names of the buried were kept in a ledger which was later transcribed and published through a joint effort of the Maplewood Area Historical Society and Park Genealogical Books. There were many John and Jane Does.

The county stopped using the cemetery in December 1923. The old potters' field was quickly forgotten, except for one grave. Conrad Samuelson cared for the grave of his friend, John Dahl who died in 1924. This was the only marked grave in the cemetery. A makeshift memorial was erected with old bricks and flowers. Two spruce trees were placed in the middle. When Conrad died, one of his wishes was that he could be buried next to his friend. He wasn't. He was buried on June 29, 1936 at Elmhurst Cemetery, on Dale and Larpenteur.

The birth and death records of New Canada Township shed some light on the people buried there. Death took its toll on the farm, especially during the hot summer months when some people died of exhaustion. Most of the causes of death were either "old age" or "senility."

Over the years, the old cemetery turned up when a project disturbed the ground at the site. When the Ramsey County horseshoe courts were improved, human remains were found. When the Williams Pipeline was dug along the railroad tracks, bones were discovered and caused great excitement among the workers. They were disappointed to learn that they had just uncovered the northern fringe of the cemetery.

On May 15, 2001, Ramsey County's first Heritage Park was dedicated, preserving the cemetery site. It's a quiet place now, scarcely heeded by the cars whizzing by on a busy White Bear Avenue. Now and then a curious cyclist will venture through the trails that wind through the cemetery. The site still looks nearly the same as it did a hundred years ago. If one knows what to look for, the old well-worn hearse road is still there, winding a path though the old potter's field. 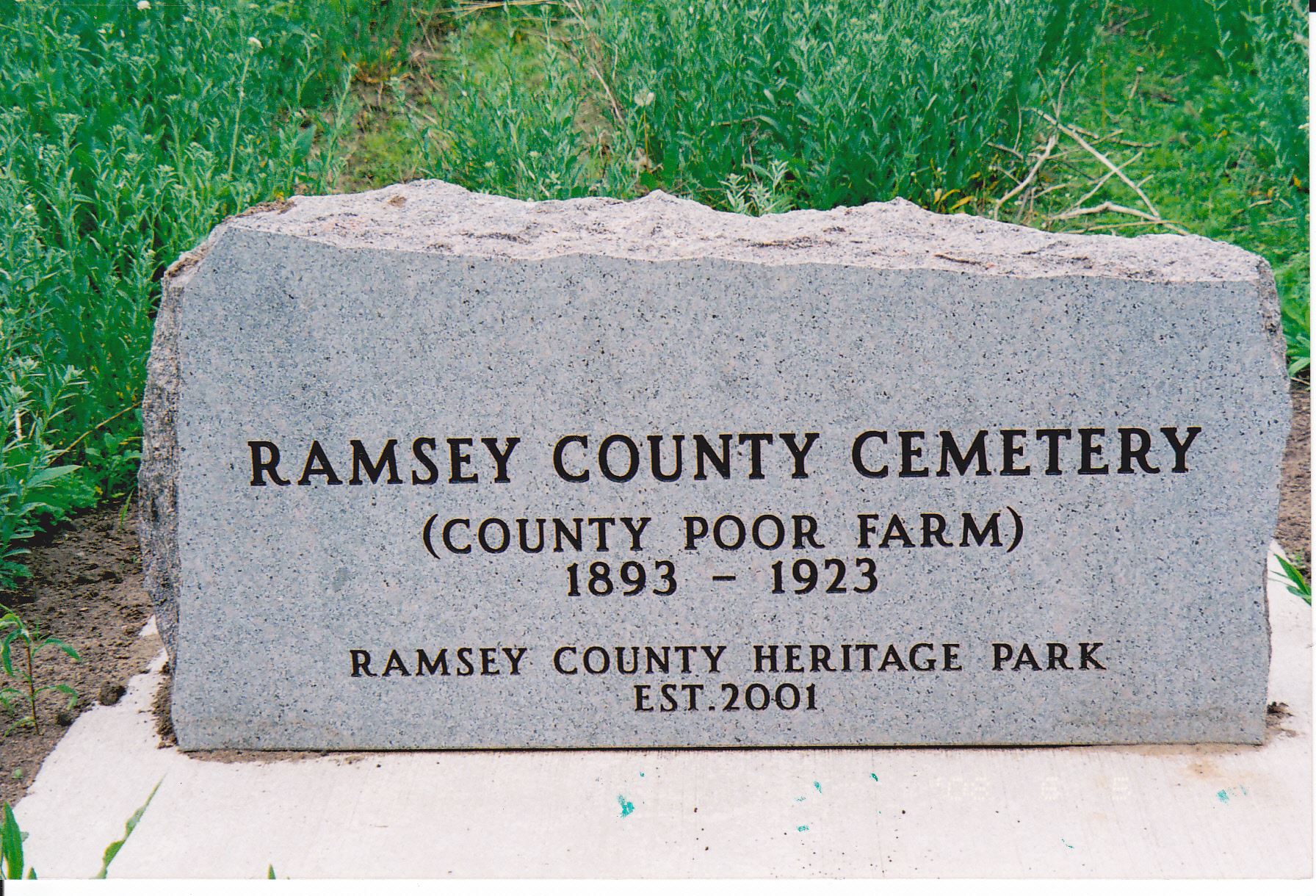