We know where Waldo was in Maplewood history - in the right place at the right time. But who was Waldo? Waldo Luebben, first mayor, long-time resident, and nursery owner helped found the Village (later City) of Maplewood.

Waldo and his wife Emmy moved to Maplewood when it was still New Canada Township. The 9-acre property they bought at the south end of Keller Lake on Arcade Street wasn't numbered in 1932. He selected 2000 Arcade. Waldo started a nursery on the property in 1937, which he operated until the 1970s. 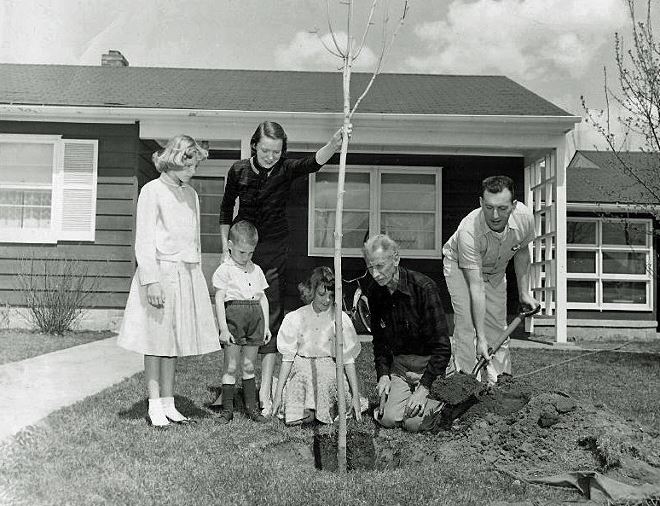 It was the right place to be for a future in local politics. Waldo helped out a neighbor who was on the New Canada Township board and became known as someone who got things done. He led the Ramsey County Civic Federation which mediated a settlement to stop North St. Paul from polluting area lakes. Waldo also served on the Ramsey County Planning Commission in the 1940s.

Chairman Luebben was at the meeting in 1956 when St. Paul officials offered to connect New Canada to the St. Paul sewer system in exchange for annexation of the 3M site. Waldo reportedly responded, "You can climb a tree and pull the tree up behind you!" Soon after, residents petitioned for New Canada to become a village to avoid annexation. As Chairman of the township board, Waldo automatically became the first village mayor when the vote passed. He went on to win the first mayoral election serving until 1959.

Waldo sold his property to Ramsey County in 1972 in the early years of the County's open space program. It became part of Keller Regional Park. Waldo died in 1974 at the age of 75, and he can be found in Maplewood at Forest Lawn Cemetery.