One of the earliest farms in Maplewood with a detailed documented history is the Bruentrup Farm. Four generations lived on the dairy farm from 1891 to 1999, at its original location on White Bear Avenue. The buildings were then moved to their present location on County Road D.

In 1882, 18-year-old William Bruentrup immigrated with his family from Mackenbach, Germany to Minnesota. He married Ida Wagner in 1891. Ida's parents sold the couple 40 acres for one dollar to start the Bruentrup Farm. William and Ida had three children: Lydia, Mable and Herbert. Herbert worked on the farm and married Rose Auger in 1933. They had two children: Joan and William. Over the years, the Bruentrups acquired additional land until his holdings included 175 acres. 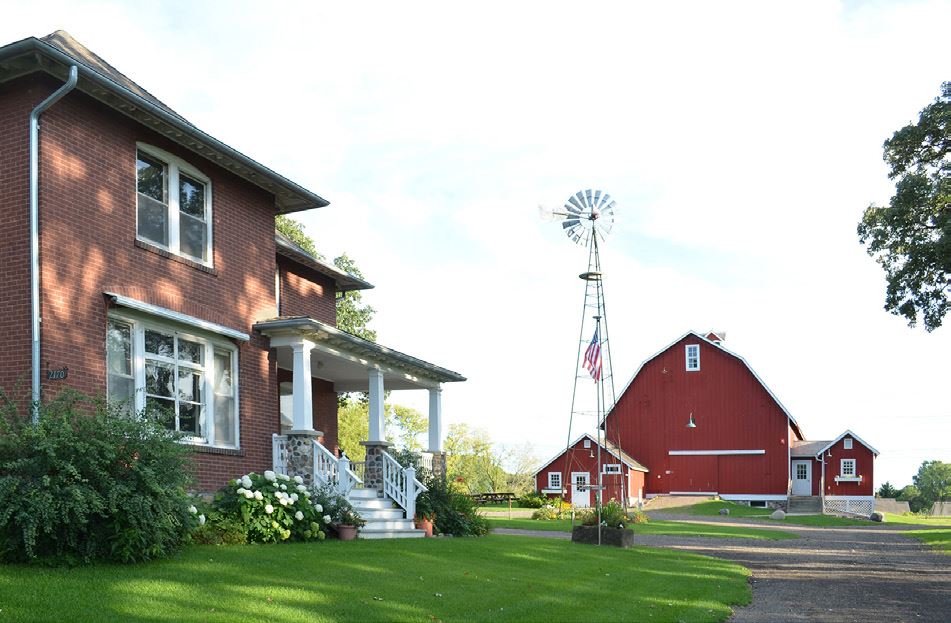 In the early 1960s, the City of Maplewood began putting street, water and sewer improvements along Beam Avenue. Herbert needed money to pay the assessments. He sold land along the north side of Beam for a housing development. When William Bruentrup left the farm in 1964, Herbert sold the dairy cows but continued to farm. In 1965, Herbert sold another 100 acres on the west side of White Bear Avenue. This land was eventually purchased by Homart Corporation and became the site of Maplewood Mall in 1974.

William Bruentrup offered to sell his home site to the City of Maplewood, but the purchase would have required a bond issue at a time when other competing interests took precedence. Instead, a developer bought the land but not the buildings. The Maplewood Area Historical Society expressed interest in the buildings and the City offered 2.5 acres of the Prairie Farm Preserve on County Road D for relocation. In 1999, a committee was formed to attain funds for the $350,000 in moving expenses.

For 108 years, the farm on White Bear Avenue was the center of activity for the Bruentrup family. It continues this tradition as a community site - The Bruentrup Heritage Farm - and is now home to the Maplewood Area Historic Society.